Reflecting on the Coalition Government’s first Budget yesterday, Dr Bill Rosenberg posed the question why the Government won’t increase spending to 30 percent of GDP, at least.

“The Government is understandably and justifiably spending on capital projects such as hospitals, schools, housing and transport infrastructure. The direction of the Budget is good, but it is much too timid in addressing the evident problems throughout our public services.

“The social pressure that has been created would be relieved if more could be borrowed, as it can be at interest rates available to the Government averaging just 3.6 percent.

“Our net debt levels are no way near worrying. If we applied a wellbeing framework to the matter, I have no doubt that the dangers to our wellbeing – our social, human and natural capital would far outweigh the risks in say a net debt target of 10 percent of GDP including the Super Fund.

“That would allow prudent borrowing to free up sufficient revenue to fund the difference between current Government operational spending and 30 percent of GDP and allow attention to be paid much more quickly and adequately to our failing services.”

“The Budget announcements loosened the purse strings in numerous areas. However, this Coalition Government will find their ambitions for transformation and a ‘productive, sustainable, inclusive economy’ well and truly pincered unless they modify their self-imposed Budget Responsibility Rules (BRR)”. 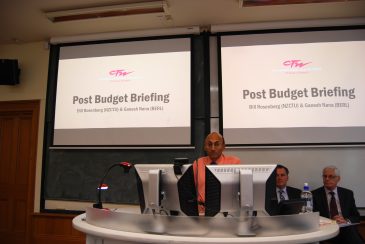