The CTU is pleased to see the end of a lockout of pulp and paper workers at Purex manufacturer Essity’s Kawerau mill, following the company’s decision to make a pay offer to its workers that meets the cost of living.

“This is a victory for working people. Essity’s behaviour in this dispute has been appalling – from its initial offer which would have been a cut in real wages for staff, to locking out its workers, stopping them from accessing their own emergency superannuation, and then legal threats against individual workers.

“The fact the company has had to back down in the face of a united workforce, solidarity from the wider union movement and outcry from the public is a win for working people and sends a strong message to foreign companies who attempt to bully their work force – Kiwis won’t stand for it.

“At issue in this dispute has been whether foreign companies making hundreds of millions of dollars a year in profit should be able to lump the cost of rising inflation on their workers by asking them to take an effective pay cut. That approach has failed in this dispute.

“On behalf of the CTU, I want to congratulate the workers who stood together to stand up to the bullying tactics of the companies, and to thank the New Zealanders from all over the country who collectively donated over $56,000 towards the strike fund for the workers. I want to acknowledge the contributions from other unions including the DWU and E Tu.

“Today is a good day for working New Zealanders, and an example of what we can achieve when we stand together in union,” says Richard Wagstaff. 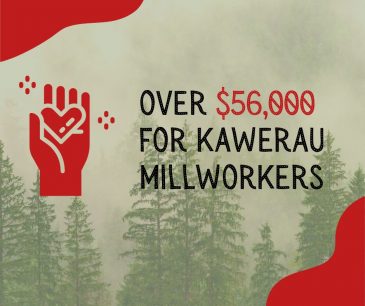