Last Tuesday the CTU launched a report by economist Dr Ganesh Nana on the evidence as to the impacts of industry (or sector) collective bargaining. We commissioned the study to promote Fair Pay Agreements which the Government is currently considering. Fair Pay Agreements aim to form a floor of wages and conditions for an industry, and to advance industry training.

BERL found (as has the OECD and most countries in Europe), that this form of bargaining is good for employment, helps to close the gap between productivity growth and wage increases, reduces inequality, and has other non-wage benefits such as “job security, working time regulation, quality of working environment, and provision and access to training”.

The sectors where CTU unions want to achieve the first Fair Pay Agreements are supermarkets, security, and cleaning. This commentary looks at the Retail sector.

The minimum hourly pay for a 21 year old shop assistant with six months’ experience in 1981, set under a form of industry collective bargaining (Awards), would have been $4.71 an hour, worth $18.62 today. Pay for an entry level supermarket salesperson aged at least 21 would have been $4.13 an hour in 1980, $18.89 in today’s terms. Both are well above what many retail workers in similar roles would be receiving today: the minimum wage or a few cents above it. It is above the current national average rate for entry level sales across all parts of the retail sector, which is $18.22 according to Retail NZ.

The share of income generated in the Retail sector that its employees receive has fallen steeply since 2009, amid rising profits. There has been strong labour productivity growth which Retail wage earners have not fully shared in. Productivity grew by 104 percent (more than doubled) between 1978 and 2018, but the buying power of wages rose only 20 percent. Even from an employers’ viewpoint of wages adjusted in terms of their firms’ revenue, between 1978 and 2017 average wages rose only 41 percent, compared to a 97 percent rise in labour productivity.

There is a large gap between wages, workers’ living standards, and what employers can afford. As BERL, the OECD and many European countries have found, industry collective bargaining such as through Fair Pay Agreements must be a major part of a fairer and more productive future. 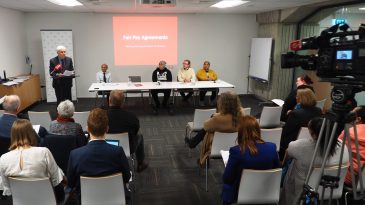