New Zealand’s business lobby explicitly opposing Fair Pay Agreements because they will raise workers’ wages should be all the evidence we need to show these reforms will be a boost to the New Zealand economy, says CTU President Richard Wagstaff.

“Today, the mask has slipped off the opponents to the Government’s Fair Pay Agreements with the EMA’s Brett O’Riley saying ‘our concern is that FPAs will lead to higher wages’.

“We’re used to business groups dressing up their opposition to FPAs in trickier language than this but today they’ve come out and said it plainly: they want New Zealanders’ wages to stay low and they don’t like policies that lift wages.

“We all know that New Zealanders’ wages lag behind places like Australia and we need to address that if we want to keep talent and skills in our country. But now we hear from the business lobby that it’s actually a good thing to keep wages low.

“Mr O’Riley is right about one thing – FPAs will lead to higher wages for New Zealanders. That’s because we are one of the only developed countries without some sort of minimum awards. FPAs set a minimum standard for pay and conditions in an industry. They still allow people to have their own employment conditions and pay, but they help lift the floor in an industry.

“Who in their right mind could oppose low-paid workers getting more money in their back pockets for the jobs they do? Especially now when the cost of living is rising and corporate profits are at such high levels.

“What today’s shocking admission from the EMA shows is that opposition to FPAs is not grounded in the substance of the bill – it’s grounded in the simple desire to keep New Zealand a low wage economy.

“If you want to see why we need FPAs, just look at the arguments of those opposing them,” says Richard Wagstaff.

Note for editors: the comments mentioned in this release were made here: 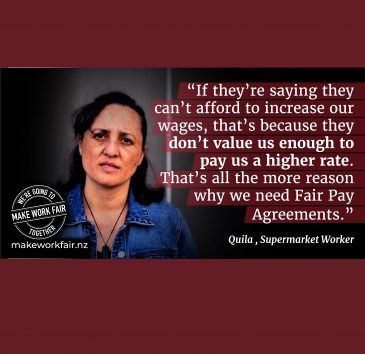