The New Zealand Council of Trade Unions and the Pulp and Paper Workers Union are thrilled with the support given to their fundraiser to support the locked-out workers at Kawerau Mill.

In less than 24 hours, the page has raised over $20,000, mainly donated by individuals.

NZCTU President Richard Wagstaff was heartened by the response to the fundraiser.

“It shows the enormous support from people right around the country for workers who are being unfairly locked out of their jobs.”

Wagstaff said he was particularly pleased to see other unions making donations.

“Unions coming together to support one another is the core of the union movement. All unions need to stand in solidarity with the Kawerau Mill workers.

“The assistance given to Kawerau workers clearly shows that New Zealanders condemn the intimidatory tactics of Essity.”

The fundraiser was started in response to manufacturing giant Essity threatening workers on strike with more than half a million dollars in damages.

145 millworkers have been locked out of their workplace by Essity since 9 August. The strike was prompted after the company refused to pay wages in line with inflation.

Essity, which manufactures for brands including Purex, Sorbent, Libra and Handee, is one of the largest hygiene and health companies in the world. In the first six months of 2022, it made a profit of $330 million NZD, with an increase in net sales of 27.8%.

Last week, Essity instructed the company’s superannuation provider to block people from making financial hardship withdrawals from their own savings.

People can donate to the fundraiser at together.org.nz/kawerau_mill_workers_need_your_support 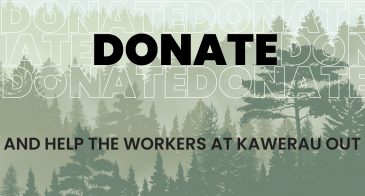