With New Zealand on the precipice of an Omicron outbreak and the economic upheaval that comes with it, the CTU’s annual Mood of the Workforce Survey shows the vast majority of kiwi workers do not have the financial resources to survive a period of unemployment.

The Mood of the Workforce Survey, an annual survey of over 1500 union and non-union workers, shows 65% of New Zealanders said they had “poor or very poor” financial capability to manage a three month period of unemployment.

“With the cost of living rising, and petrol and housing costs rising at record levels, too many New Zealanders are still living paycheck to paycheck, unable to put enough money aside to see them through a rainy day.

“Going through the responses from workers, it’s clear that even workers on good salaries are finding it all but impossible to build up any sense of financial security – leaving them at real risk when a crisis strikes.

Some of the things workers said to us in response to our survey:

“This isn’t just a dangerous situation for workers and their families – it puts our whole economy at risk. When recessions or economic shocks hit, if skilled our workers aren’t able to survive a period of unemployment while they find a new job, what happens is they move into less skilled positions, and our economy loses the benefit of the skills they’ve built up.

“Economists call this economic scarring and it deepens recessions, makes it harder for businesses to find skilled workers in the future and lowers our productivity in the long term. It means we’re stuck on the hamster wheel – forever unable to get ahead of the next economic shock, be it a recession, a financial crisis, a natural disaster or a pandemic.

“This is why its so important the Government progresses it’s plans for a Social Unemployment Insurance programme – an ACC like scheme to support workers who lose their job. It would mean people would be paid 80% of their wage for a period if they are out of work – giving them time to find a job in their industry where the skills they’ve developed can be used.

“If the last few years have taught us anything, it’s that major economic shocks are never too far away and we need to build an economy where it’s easier for workers to bounce back” says Richard Wagstaff. 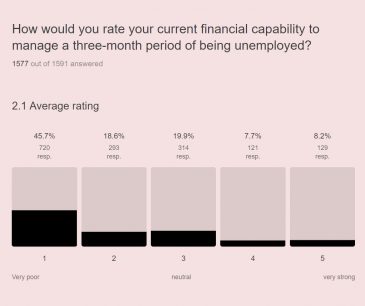