Top income earners and property investors would gain $5.8 billion, more than half of the entire tax cuts proposed by the National Party according to new analysis by New Zealand Council of Trade Unions Economist Craig Renney.

“It’s hard to understand why in a cost-of-living crisis that disproportionately harms the poorest,  you would design a package that is so heavily skewed to those who need it the least. More than half of taxpayers would receive either $2 a week or nothing at all,” said Renney.

“For every dollar in tax cuts that goes to the bottom half of income earners, more than two million New Zealanders, National wants to give ten dollars to the top 5% of income earners and landlords.”

“This is a question of priorities. If the Government is going to spend $11 billion, it should be focusing that money on public services like health, education and housing or on boosting incomes for families who need it, not a tax package focused on the well-off.”

The analysis used National’s proposed tax policies and data from Treasury and IRD to calculate who would receive the benefit of those policies. These policies include the income tax bracket changes, the removal of the top rate of 39% and the property tax changes.

The total cost of these changes in terms of lost revenue is $11 billion over three years.

The proposed tax bracket adjustments and removal of the top tax rate delivers significant gains to those earning over $129,500 – who are the top 5% of income earners.

The top 5% of earners would receive $3.3 billion in  income tax cuts over three years. Property investors stand to gain $2.5 billion from the axing of interest rate deductibility and ring fencing of losses, and cutting the bright line test back to two years.

“When you add it all together top income earners and those who own multiple properties end up with the lion’s share of the income benefits of National’s tax cuts – $5.8 billion or 53% of the gains,” said Renney.

“If Christopher Luxon was Prime Minister he would gain around $54,000 over three years, or $349 a week, quite apart from the gains from the properties he owns. A minimum wage worker would gain $2.15 a week – not enough for a loaf of Tip Top White.

“These are massive and uncosted tax cuts the country can’t afford, targeted at the most well-off. Instead of supporting workers with Fair Pay Agreements, lifting the minimum wage, and strengthening public services, National believes that $2.15 a week is enough.

“National’s tax cut policy is simply not responsible.  We’ve already seen the destructive impact of the UK’s now abandoned tax cut plan under former PM Liz Truss and yet National is not heeding the lesson.

“The NZCTU urges National to rethink its approach and, instead, concentrate on supporting working families and funding the public services they need.”

National’s tax package would give $2.5 billion over three years to landlords.  Property investors tend to have higher incomes but the distributional impact of changes to landlord taxation (bright-line test, loss ring fencing, and interest deductibility) can’t be modelled with any certainty.

We have used IRD data to model the distributional impact of income tax cuts, using the same methodology used by Treasury and National, and Treasury forecasts of wage increases.

National has also pledged to cancel the proposed New Zealand Income Insurance Scheme, an option for a targeted rate to part-fund Auckland light rail, and the fiscally-neutral Clean Car Discount. None of these have a net fiscal cost in the Government accounts, so there is no net tax cut to be realised by cancelling them.

National has also pledged to repeal the Auckland Regional Fuel Tax, which generates revenue for Auckland Council and replace it with an unnamed revenue source. Being fiscally neutral, this also creates no net tax cuts.

The costings on the landlord tax changes comes from the Regulatory Impact Statements. The cost of restoring interest tax deductions for property investors on non-new rentals is likely a significant underestimate due to the increase in interest rates.As with Treasury forecasts of the impact of tax changes, no assumptions are made about impacts on economic growth.

National has not been clear on the timing of its tax package but it has committed to immediately adjusting income tax thresholds. Leader Christopher Luxon has said “We are going to remove interest deductibility immediately, we’ll unwind the bright line test as well”. This makes up the majority of the package costs. National has said that it may phase some elements of the package but has provided no details. Given this, the analysis assumes all tax changes are implemented from 1 July 2024. 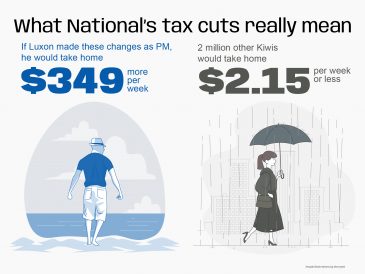